Never one to settle for the norm and always believing there is a better way, creative pioneer Aleene Jackson’s determination and demand for superior quality prompted the creation of an adhesive that fueled the crafting industry and has been the glue holding it together since the 1950s.

The Original Tacky Glue creator, crafting industry trailblazer and educator began her career in the 1950s as a florist, working in a hotel flower shop before purchasing her own at the age of 20. After a few short years, Aleene grew her business into a floral supply store, where she also taught classes on flower making, floral arrangements and more. Always one step ahead with a business-savvy nature, it didn’t take Aleene long to make a name for herself in the floral industry, between weekly television appearances showcasing how to make floral crafts, stories in publications and classes at her shop that attracted people from all over.

There was only one problem: Aleene needed a thick glue that could not only hold her floral arrangements together, but last as well. And because she couldn’t find one that met her expectations, Aleene created “Glue d’Aleene,” which she began using in her classes. The tacky white glue became so popular that she started bottling and selling it, eventually modifying the name to “Aleene’s Original Tacky Glue.” She chose the gold bottle that is still used today to reflect the premium quality of its contents – the gold standard of adhesives – which has been the glue of choice for generations of crafters, hobbyists and households since its inception.

From that first gold bottle of Aleene’s Original Tacky Glue to today’s variety of more than 60 unique adhesive options, every Aleene’s product is formulated to deliver premium quality and performance that loyal Aleene’s consumers expect and rely upon.

From our family to your family … for all of life’s creative moments. 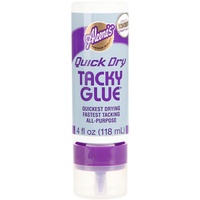